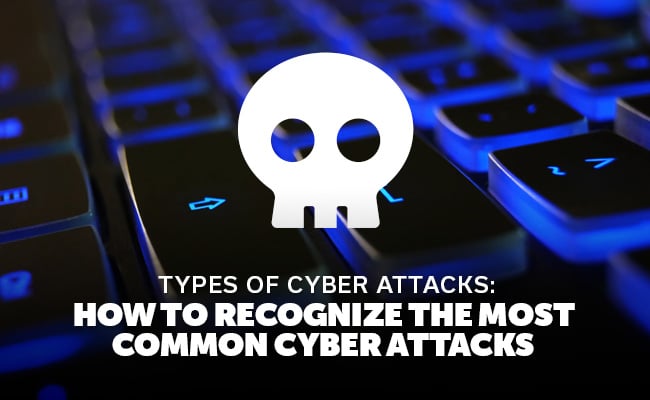 Did you know 60% of small businesses end up folding within 6 months of suffering from a major cyber attack?

Despite this huge threat, many companies are complacent about cybersecurity, with little education provided to their employees about it too. In fact, they have very little knowledge about computers, let alone cybersecurity.

To help you educate your workplace, here are some types of cyber attacks you need to be aware of.

A denial of service (DoS) attack is when a cybercriminal tries to overwhelm a system by flooding it with requests. This kind of attack is often done with the intention of bringing down a website. A successful DoS attack can be very effective at preventing people from accessing a site.

Related Post: Best way to protect your business from ransomware.

This one has been a popular kind of attack in the last few years.

A ransomware attack will usually go something like this: you inadvertently open an infected file and then the ransomware encrypts all of the files on your PC. You'll then be greeted by a screen that explains what the malware has done, demanding payment via Bitcoin to decrypt the files.

Generally, it's very difficult, if not impossible, to decrypt the files yourself. Even if you send the Bitcoin, your files still might not get unencrypted.

The best defense against this kind of attack is to always have your important files backed up. A good method is to use cloud-based storage.

When it comes to cybersecurity, passwords are key. If you have someone's password, you can do all kinds of damage by possibly unlocking multiple accounts.

They might also use what's known as a dictionary attack. This kind of attack uses software that contains a list of common passwords.

Man in the Middle Attack

A man in the middle attack is when a cybercriminal positions themselves in between the communications between a client and a server. For example, they might use IP spoofing, which involves convincing the victim's system that it's communicating with a trusted entity rather than an attacker.

A phishing attack is more about social engineering than it is about hacking. A phishing attack uses various methods to try and trick someone into revealing their password. For example, you might create a fake login page that looks identical to the legitimate site.

Security software can't help you much against these kinds of attacks, as it doesn't involve any malicious code or a breach of your system. However, it can detect spoofed sites and block them for you.

Protect Yourself Against All Types of Cyber Attacks

To protect against all types of cyber attacks, it’s imperative you have good antivirus and firewall software. On top of that, you also need to have good critical thinking skills and the ability to sniff out a scam.

A lot of security threats rely on social engineering rather than actually breaching a system. Don't fall into the trap of thinking you're safe just because you run the right software.

Got kids who like to surf the internet? Here are 5 tips for safeguarding them when online.